Job Part 2: God is present in the midst of our suffering 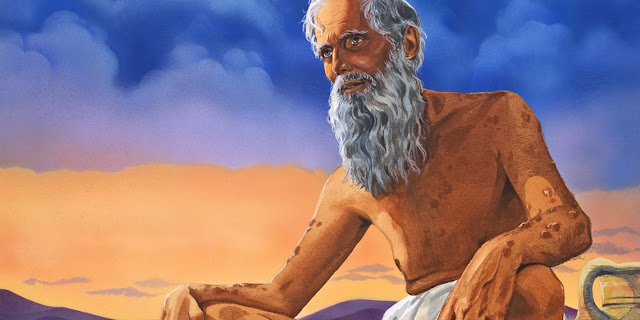 "So who am I, that I should try to answer God or even reason with him? Even if I were right, I would have no defense. I could only plead for mercy. And even if I summoned him and he responded, I'm not sure he would listen to me. ... "God is not a mortal like me, so I cannot argue with him or take him to trial. If only there were a mediator between us, someone who could bring us together. The mediator could make God stop beating me, and I would no longer live in terror of his punishment. Then I could speak to him without fear, but I cannot do that in my own strength. - Job 9:14-16, 32-35 NLT


These verses are part of Job’s response to a friend, who said Job must have sinned to be suffering so greatly. But suffering is not always a result of our sin and to view suffering this way diminishes God’s authority and goodness.

When Satan’s first attempt to cause Job to curse God failed God granted permission for Satan to try again, this time with permission to inflict great physical pain on Job. Even when Job’s wife called on him to curse God and die, Job did not sin.

Then Job’s three friends, Eliphaz, Bildad, and Zophar, joined him in mourning on account of his suffering. After sitting with Job for a week saying nothing Job broke the silence. The bulk of the book of Job is a record of the lengthy conversations between these four men. The three friends’ basic position was that Job must have done something wrong to deserve this great suffering and so he should repent. Job, however, countered that he had done nothing wrong and so he had nothing to repent of. These friends looked at life through a transactional lens, a direct cause and effect for sin and suffering, i.e. sin leads to suffering but innocence leads to blessings. It is a common mistake that comes from a limited worldly perspective and sounds very similar to a prosperity doctrine. When we view life this way we diminish God’s authority to that of something very similar to a cosmic traffic cop. When someone fails to obey the rules, the God up in the sky slaps them with a costly traffic ticket. Others treat God like a sanctified Santa Claus who is the jolly rewarder to good boys and girls. Of course that also means lumps of coal in the stockings of the bad children.

God wants us to have a better perspective of Him and of life. He wants us to think well about who He is and how He operates as sovereign ruler of creation. God is not a distant deity who sits on His heavenly throne with no interaction with humanity far below. God is a personal God who created people in His image to be in a personal relationship with Him.

Job clings to the position that he is innocent and therefore his suffering is not divine justice. He claims that what he is experiencing is not punishment because he did not sin. On these two points he is correct, Job did not sin and his suffering is not punishment. These two points, however, lead Job to two possible conclusions, either God doesn’t run the world according to justice or God is unjust.

Job’s friends begin at the other side of the argument, their premise is that God is just, therefore God runs the world according to justice. Both statements are, of course true. Their conclusion then is that Job must have sinned.

After all the debates that make up most of the book of Job there remains no clear answer. Why do the righteous suffer?

Job was in such pain that if he could, he would have taken God to court to plead his case. But he recognized hat he would need a mediator with authority over God. Given this impossibility, Job felt alone and powerless. But God had not abandoned Job. Contrary to Job’s feelings about his circumstances, God was still near to him and listening. God would eventually prove His presence to Job when He reveals Himself in great power (Job 38-40) and demonstrates beyond doubt that God had not abandoned him.

Job, a mere mortal, knows that he would be the loser if he were to attempt to confront God’s charges as an accused might confront his accusers in a court of law. He longs for a mediator, someone whom both parties to such a lawsuit would accept as a neutral figure. This mediator would bring both parties together and protect Job from the terror of God’s wrath. Then Job would be able to present his case without fear of Him, but in the current circumstances he dare not do so. Job’s longing for a mediator takes on addition resonance when we think of Paul’s words, "For there is only one God and one Mediator who can reconcile God and humanity--the man Christ Jesus." {1 Timothy 2:5 NLT}. Job longs to be able to defend himself but as believers we have no need to do this, our eternal mediator intercedes with God on our behalf. That is why we can approach God confidently without fear. The Holy Spirit also intercedes for God’s people in accordance with the will of God. Job lamented the rapidly passing days of his life fearing that God would continue to punish him no matter what he did. Job ruled out other possible responses as futile, he recognized the vast gap between God’s holiness and man’s sin. He longed for someone to mediate his case impartially. The book’s treatment of this desire on the part of Job reveals the need and anticipates the solution for a perfect mediator between God and man, the Lord Jesus Christ.

God has proven His presence in our lives in an even greater way by providing the mediator Job longed for to bridge the gap between sinful man and holy God, His Son Christ Jesus who took on flesh. Fully God and fully man, He lived the perfect, sinless life we could not live, died the death we deserve to die, and rose from the grave conquering sin and death. Jesus is our great mediator who intercedes on our behalf and through His suffering He has brought us to the Father. And through the gift of the Holy Spirit God walks with us in our suffering today.

We need to recognize that no amount of suffering can separate us from the love of God. We can endure knowing that all suffering has the purpose of sanctifying us to make us more like Christ. We can display the love of God to the world through our suffering by remembering that our outward circumstances cannot change our inward communion with God through the power and presence of the Holy Spirit.
Bible Job