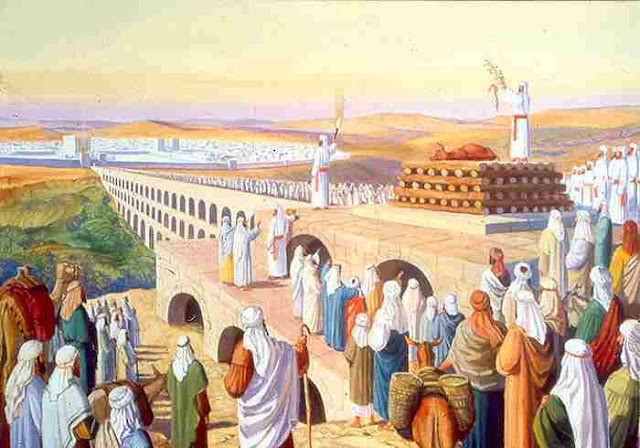 The symbolism of animal sacrifice in the Bible is a concrete expression of God’s justice and grace at the same time. It reminded the Israelites of the serious nature of sin, its consequences for the individuals involved, and for the community at large. These sacrifices showed the Israelites and us how much God wanted to stay in His covenant relationship with them, so they could become the “kingdom of priests” who would reflect God’s good nature, and they also provided a way for the people to thank and praise God.

The sacrifices provided for the people in multiple ways:

There are five main types of sacrifices, or offerings, in the Old Testament:

These five sacrifices can be further categorized into voluntary and mandatory sacrifices. The offerings that were mandatory dealt directly with the forgiveness of sin. Everyone has sin, both intentional and unintentional and that sin must be dealt with. These included the sin and the guilt offerings.

He must bring the bull to the LORD at the entrance of the Tabernacle, lay his hand on the bull's head, and slaughter it before the LORD. - Leviticus 4:4 NLT


The offerings that were voluntary were offerings of worship and thanksgiving, praising God for His unwarranted favor. These included the burnt, grain and peace offerings. Each of these offerings is described as a sweet aroma to the Lord.

Speak unto the children of Israel, and say unto them, If any man of you bring an offering unto the LORD, ye shall bring your offering of the cattle, [even] of the herd, and of the flock. - Leviticus 1:2 KJV

The burnt offering was a voluntary act of worship to express devotion or commitment to God but it could also be used as atonement for unintentional sin. It signified propitiation for sin and complete surrender and devotion and commitment to God. This offering used a bull, ram, male goat, turtledoves or pigeons without blemish. The meat, bones, and organs were totally burnt on the alter as God’s portion. The hide was given to the Levites, who could sell it to earn money for themselves. The smoke from the sacrifice ascended to God as a special gift, a sweet savor, a pleasing aroma unto the Lord.

"If the animal you present as a burnt offering is from the herd, it must be a male with no defects. Bring it to the entrance of the Tabernacle so you may be accepted by the LORD. Lay your hand on the animal's head, and the LORD will accept its death in your place to purify you, making you right with him. ... But the internal organs and the legs must first be washed with water. Then the priest will burn the entire sacrifice on the altar as a burnt offering. It is a special gift, a pleasing aroma to the LORD. - Leviticus 1:3-4, 9 NLT


Leviticus chapter one details the different ways to offer a burnt offering. This is the oldest and most famous offering in the Bible; Abel’s offering Genesis 4:4, Noah after the flood Genesis 8:20, and Abraham offered one in place of offering Isaac Genesis 22 for just a few examples.

A person could give a burnt offering at any time. It was a sacrifice of general atonement above and beyond the required sin offering—an acknowledgement of our sin nature and our remorse, and a request for a renewed relationship with God. God also set times for the priests to give a burnt offering for the benefit of the Israelites as a whole:

The ultimate fulfillment of the burnt offering is in Jesus’ sacrifice on the cross. His physical life was completely consumed, He ascended to God, and His covering (that is, His garment) was distributed to those who officiated over His sacrifice (Matthew 27:35). But most importantly, His sacrifice, once for all time, atoned for our sins and restored our relationship with God.

The grain offering was a voluntary offering in which the fruit of the field was offered as a cake or baked bread made of grain, fine flour, oil, frankincense, and salt. This offering was often accompanied by a drink offering of about a quart of wine, poured into the fire.

This offering was used to express thanksgiving for the first fruits of the harvest and God’s provisions in general and thanked God for His unmerited goodwill toward the giver. The priests were given a portion of this offering to eat within the court of the tabernacle.

"When you present grain as an offering to the LORD, the offering must consist of choice flour. You are to pour olive oil on it, sprinkle it with frankincense, ... "No matter how a grain offering for the LORD has been prepared, bring it to the priest, who will present it at the altar. The priest will take a representative portion of the grain offering and burn it on the altar. It is a special gift, a pleasing aroma to the LORD. - Leviticus 2:1, 8-9 NLT


This offering represents Jesus Christ as the Bread of Life (John 6:48). He nourishes our souls as we worship Him and ponder His Word (Acts 20:32).


The Fellowship or Peace Offering

The peace offering was a voluntary sacrifice given to God in three specific instances:

Today we think of a peace offering as a way to make someone pleased or less angry with us by giving or saying something desired, None of these three reasons to sacrifice had anything to do with propitiation, with appeasing God, or with pacifying Him. The idea is not appeasement but thanksgiving and celebration. It is not to seek peace but because we have peace that we give this offering. Furthermore, the peace offering was meant to be eaten—only a portion of the animal or grain brought to the altar was burned; the rest was given back to the worshiper and to the poor and hungry.

The beautiful picture here is of God’s provision for His people, both physically and spiritually. His grace and goodness are present throughout the offerings. God has provided for what we need and the peace offering was a way to thank Him for His goodness and physical sustenance.

"If you present an animal from the herd as a peace offering to the LORD, it may be a male or a female, but it must have no defects. ... The priest must present part of this peace offering as a special gift to the LORD. This includes all the fat around the internal organs, ... and Aaron's sons will burn them on top of the burnt offering on the wood burning on the altar. It is a special gift, a pleasing aroma to the LORD. - Leviticus 3:1, 3, 5 NLT


The meat of the peace offering of thanksgiving must be eaten on the same day it is offered. None of it may be saved for the next morning. - Leviticus 7:15 NLT


The peace offering was voluntary and symbolized fellowship with God and each other. Jesus’ blood reconciles sinners to God and one another. He is our peace across all boundaries spiritual, ethnic, and national.

There is no longer Jew or Gentile, slave or free, male and female. For you are all one in Christ Jesus. - Galatians 3:28 NLT

The sin offering was made for sins committed in ignorance, or unintentional sins. The ritualistic method of the sin offering and the animal to be offered varied depending on the status of the sinner. A high priest who sinned unintentionally would offer a young bull. A king or a prince would offer a young male goat. People in the private sector would sacrifice a young female goat or lamb, unless they were too poor, in which case they were only required to offer two turtledoves or pigeons. The point being that everyone is capable of affording the sacrifice needed from the very wealthy to the very poor. Those given much must give much in return, those given only a little can still give a little. The opportunity for forgiveness is open to all.

"If any of the common people sin by violating one of the LORD's commands, but they don't realize it, they are still guilty. When they become aware of their sin, they must bring as an offering for their sin a female goat with no defects. ... Then he must remove all the goat's fat, just as he does with the fat of the peace offering. He will burn the fat on the altar, and it will be a pleasing aroma to the LORD. Through this process, the priest will purify the people, making them right with the LORD, and they will be forgiven. - Leviticus 4:27-28, 31 NLT


The sin offering was a poignant picture of the sacrifice of Jesus Christ for the sins of the world. He was a “lamb without blemish” whose precious blood was spilled after being publicly slain.

This sacrifice was exclusively a ram. it was given as atonement for unintentional sins that required reimbursement to an offended party, and also as a cleansing from defiling sins or physical maladies. The fat portions, kidneys, and liver were offered to God, and the remainder of the ram had to be eaten inside the court of the tabernacle.

"If one of you commits a sin by unintentionally defiling the LORD's sacred property, you must bring a guilt offering to the LORD. The offering must be your own ram with no defects, or you may buy one of equal value with silver, as measured by the weight of the sanctuary shekel. You must make restitution for the sacred property you have harmed by paying for the loss, plus an additional 20 percent. When you give the payment to the priest, he will purify you with the ram sacrificed as a guilt offering, making you right with the LORD, and you will be forgiven. - Leviticus 5:15-16 NLT


The Price of Sin

The tabernacle was a vivid reminder of the price of sin and the blood never stopped flowing. Only God could provide them with the sheer volume of animals needed to maintain this system for this many people.
Exodus Law Sacrifice Tabernacle