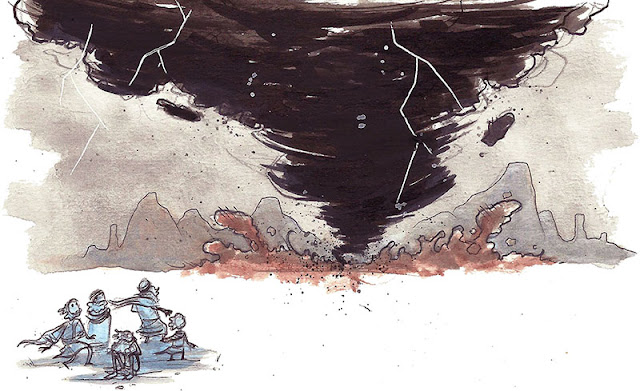 Then Job replied to the LORD: "I know that you can do anything, and no one can stop you. You asked, 'Who is this that questions my wisdom with such ignorance?' It is I--and I was talking about things I knew nothing about, things far too wonderful for me. You said, 'Listen and I will speak! I have some questions for you, and you must answer them.' I had only heard about you before, but now I have seen you with my own eyes. I take back everything I said, and I sit in dust and ashes to show my repentance." - Job 42:1-6 NLT


Most of the book of Job centers on Job’s desire to know why he was suffering, believing there had been a mistake. Answers were what Job wanted most, but when God showed up He had something far greater in store for Job than answers, He had Himself.

Behind all the arguments of both Job and Job’s friends is the assumption that they had accumulated enough knowledge and experience to be able to understand the motivations of God. When God shows up He takes Job on a grand tour of creation showing him things of the smallest detail and grandest scope. Why does God discuss these wide ranging topics that seemingly have nothing to do with Job’s suffering?

After job’s friends had consistently misinterpreted his suffering and Job had overplayed his desire to question God, Job heard extensively from God, who spoke from a whirlwind. Time and time again, the Creator asked if Job had the depth of knowledge to understand the mysteries of creation. Job remained in awestruck silence throughout most of God’s response. Job had been humbled before his maker, reminded of God’s sovereignty and divine presence over the world which is precisely what Job’s heart needed. Though God’s words may have initially stung they were the path to reassuring Job of what he needed most. Job didn’t need an explanation from God in his time of suffering, all Job needed was God Himself.

When we suffer we instinctively cry out for God’s presence. Like everyone, we want relief from our pain, but as our faith grows deeper through life, what we ultimately want and need is a deeper walk with God. We should echo the life of Paul whose highest goal was to know Christ even if that path is through suffering, pain, and adversity. Suffering is simultaneously a driving force for and the path to growing closer to Jesus.

While God does not give a direct answer in Job we do find an explanation that is a little more satisfying in the New Testament.  In James we are told that we should take great joy in difficult because God will use that difficulty to grow us spiritually.  And there is always that famous verse, so often quoted but no less true, all things, even the hard, painful things, God will use for our good if we trust Him.

"Dear brothers and sisters, when troubles come your way, consider it an opportunity for great joy. For you know that when your faith is tested, your endurance has a chance to grow. So let it grow, for when your endurance is fully developed, you will be perfect and complete, needing nothing." (James 1:2-4 NLT)


"And we know that God causes everything to work together for the good of those who love God and are called according to his purpose for them." (Romans 8:28 NLT)


God’s message and presence demanded a response from Job. Job had begged for a personal encounter with the Lord and it happened. Now what was Job able to do?

Job begins by acknowledging the sovereignty of God. Rather than continuing to dwell on wanting an answer for his grief, Job transitioned to focus on God’s authority instead. He had moved from demanding an answer about earthly things to acknowledging God’s control over eternal things.

When we suffer we act very much like Job, our natural inclination is to crave and perhaps even demand relief and explanation. We can even speak to God like Job spoke to Him. But also like Job, our true need is to see Jesus for who He has revealed Himself to be. True relief is found not in the cessation of pain but in resting in the sovereignty of God. Since Jesus has been revealed as the Savior we can trust Him in both the temporary circumstances of this world and in the eternal realm that is yet to come. Whether it is death, disease, natural disasters or some other discomfort, Jesus’ reign as the sovereign King is enough for us to trust Him in the daily grind of life.

Job also responded to God with humility, recognizing that his speeches had been an overreach on every account. His personal demands for the God of the universe to give an accounting to a mere mortal were too much. Job discovered that all he needed was to be silent before the God of the universe. The presence of the Creator filled every void that suffering had brought into his life. This was what Job needed most, and what we need as well.

It is clear that not only has Job seen God, he has also seen himself, which can be seen in Job 42:6 “therefore I despise myself and repent in dust and ashes”. His experience is similar to that of Isaiah 6:1-5. It is only when we meet God, when we truly understand just how holy He is that we can understand who we are. Job’s words do not indicate that he now hates himself; rather they express his regret over his arrogant questioning of God’s motives in allowing Job’s suffering. After Job’s repentance God turns to his friends and demands burnt offerings from them for their sake but Job, who react correctly, is forgiven already.


God used Job’s suffering to draw him closer to Himself, not despite his pain, but through his pain. The same is true for us. Jesus has told that His people will be persecuted, endure hardship, and suffer for His name. it is this very suffering that can draw us closer to God as we identify with Him through our suffering. There is beauty alongside the pain in our suffering for this reason: it brings us closer to our Savior.

Our response to suffering should be to acknowledge God’s sovereignty in humility knowing our suffering identifies us with Christ.

The suffering of Job is a real-life story that represents a greater reality. We should not diminish Job’s suffering nor ours, but at the same time we should view suffering from an eternal perspective. When the Lord revealed His eternal character to Job in the whirlwind He was speaking to us as well. The ultimate answer to pain and suffering in this world is God Himself. The ultimate answer to the suffering of our sin is the same, Jesus Christ, whose life, death, and resurrection provide the forgiveness we need so we can experience what our hearts need most, a relationship with our Creator.
Bible Job