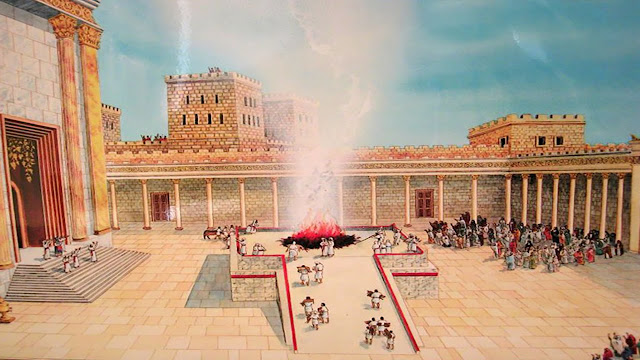 What imagery does animal sacrifices in pagan worship conjure in your mind?

The gods are angry with me and are going to kill me. But, maybe if I kill this animal and make sure the gods get their pound of flesh they will be appeased and happy for a while, and maybe, just maybe, they won’t kill me or send a plague on my family. Maybe. They might even send rain.

Sure, it’s barbaric, but so are the gods.

The God of the Old Testament is often portrayed in a similar fashion, an angry and vindictive deity demanding His pound of flesh for every minor infraction.

God is holy and perfect. I am not. Therefore, God is angry at me, hates me even, and has to kill me. But, because of His mercy, He will let me bring an animal to Him and let the animal be killed instead of me. Thankfully Jesus came to be the one who gets killed by God instead of me or the goat. Jesus rescued me from God so now I can live and later I can go to the happy place instead of the bad place. This is not the story of Leviticus, the sacrifices or the Old Testament. This is a story of need, not the story of love and mercy the Bible and the sacrifices actually portrays. We need to change our perspective.

Sin is a vile act that defiles God’s good world. Sin is rebellion that leads to power struggles, violence, and widespread, systemic evil. Sin has a corrosive, defiling effect not only on the wrongdoer but on the entire community. The tabernacle is being built, God wants to dwell among His people but sin in the community would defile this sacred space as well.

God wants to dwell among His people, but sin makes God want to leave. The Israelites are sinful and corrupt humans (like all of us) who are going to keep sinning. They’re in desperate need of God to purify and cleanse them. They needed a system of some kind that could do the following:

God wants to dwell with His people but He cannot dwell with sin. The reward for sin is death. For every sin a life must be taken. The taking of life is a deterrent against future wrong doing. The taking of a life removes the sin from the community, purifies the temple / tabernacle and allows God to dwell with His people, but someone who dies in their sins cannot be forgiven of them and such a tainted life can only pay for its own sins, not the sins of another. So under the law a person can pay for their own sins by spending an eternity in hell but they cannot dwell with God and they cannot pay for the sins of anyone else.

But God offers a solution.

Because sin vandalizes God’s world with death and pain, God has every right to make people face the just consequences. Thankfully, God loves His people and does not want to kill them, and so an animal’s life is symbolically offered as a ransom payment that would cover them. Since blood represents life, the opposite of death, its sprinkling around the temple would act like a deterrent and it can symbolically wash the temple of death (the natural result of sin) and defilement. The end result is that God’s presence stays squarely in the midst of the people of Israel.

God is not angry with us, God loves us and wants to be near us. But our sin is so grievous only death can satisfy God’s justice. We cannot pay for our own sins and dwell with God so instead of taking our life God offers to take the life an animal instead. This substitute is not offered by humans hoping to appease a volatile and angry deity. It’s precisely the opposite! This substitute is provided by God himself.

God created the sacrificial system. God designed and provided for the construction of the tabernacle where the sacrifices would take place. God asked for an innocent animal to pay the price for sin and God provided the animals. God would eventually provide the ultimate substitute for all sinners by offering His own life as payment for our sin. God removes the barriers between Him and us out of love for us, not anger, not appeasement. This is the story of Leviticus and the sacrifices of the Old Testament.
Law Sacrifice Tabernacle